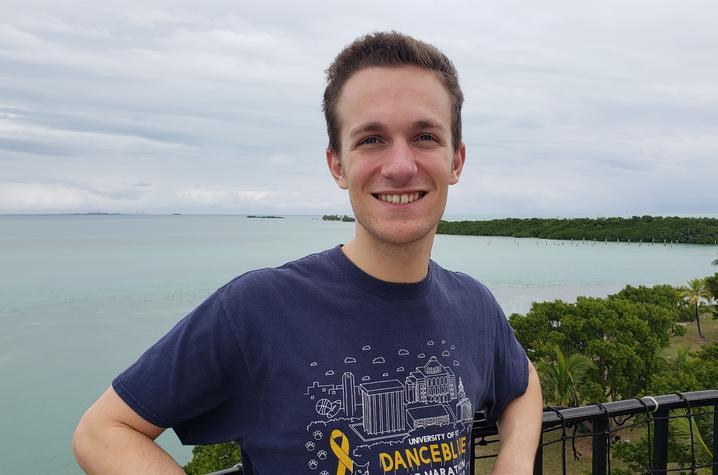 LEXINGTON, Ky. (Nov. 4, 2020) — The University of Kentucky Office of Nationally Competitive Awards has announced that foreign language and international economics/Chinese and international studies major and Chellgren Fellow Michael Di Girolamo has been awarded a Critical Language Scholarship (CLS) to study Chinese. The Critical Language Scholarship is an intensive language and cultural immersion program for American students enrolled at U.S. colleges and universities.

Administered through the U.S. Department of State, CLS is part of a wider government initiative to expand the number of Americans studying and mastering one of 15 foreign languages that are critical to national security and economic prosperity. Participants are expected to continue their language study beyond the scholarship period and later apply their language skills in their future professional careers.

Sydney Blocker, a political science and international studies senior, and Sereniti Coulter, a linguistics sophomore, were named alternates for the 2020 CLS program.

The son of Martin and Kelly Di Girolamo of Lexington, Di Girolamo plans to use the knowledge he gains from the CLS program in his future professional endeavors.

“Whether I decide to work for the American government under the Department of State or choose to pursue a path in the private sector working for a nongovernmental organization or financial institution, an advanced understanding of the Chinese language and culture will prepare me for a world in which the United States and China are the dominant political and economic forces,” he said.

Di Girolamo became interested in East Asia during summer 2017, when he participated in the Department of State's National Security Language Initiative for Youth (NSLI-Y) program to study Korean in Jeonju, South Korea. During his time at UK, he has served as a research assistant in the Bilingual and Biliteracy Research Lab and as a student assistant and acting office coordinator in the Office of China Initiatives, studied classical Chinese through independent study, and cofounded the UK Korean Language and Culture Club. He has also completed an internship with U.S. Embassy in Seoul, participated in the Indiana University Chinese Flagship Summer Language Workshop and received a Zolondek Travel Grant from the College of Arts and Sciences to study in Italy. He credits Liang Luo, Matthew Wells and Ioana Raluca Larco, associate professors in the Department of Modern Languages, Literatures, and Cultures, and Sihui Ke, assistant professor in the Department of Modern Languages, Literatures and Cultures, for serving as mentors during his time at UK.

Upon completing his degree in May 2021, Di Girolamo plans to attend graduate school to study international relations, with a focus on Korean Peninsula affairs in addition to China affairs. Before entering graduate school, he hopes to spend a year teaching English with the Fulbright Program in Taiwan or the Japan Exchange and Teaching (JET) Program.

“Either of these experiences would greatly benefit me by preparing me to better understand East Asian societies and cultures outside of the Korean Peninsula, providing an interesting contrast to my experiences in Korea,” he said.

The Office of Nationally Competitive Awards assists current UK undergraduate and graduate students and recent alumni in applying for external scholarships and fellowships funded by sources (such as a nongovernment foundation or government agency) outside the university. These awards honor exceptional students across the nation. Students who are interested in these opportunities are encouraged to begin work with the office, housed in the Chellgren Center for Undergraduate Excellence, well in advance of the scholarship deadline. Staff is available for virtual appointments to discuss opportunities for the 2020-2021 academic year and beyond.

The University of Kentucky is increasingly the first choice for students, faculty and staff to pursue their passions and their professional goals. In the last two years, Forbes has named UK among the best employers for diversity, and INSIGHT into Diversity recognized us as a Diversity Champion three years running. UK is ranked among the top 30 campuses in the nation for LGBTQ* inclusion and safety. UK has been judged a “Great College to Work for" three years in a row, and UK is among only 22 universities in the country on Forbes' list of "America's Best Employers."  We are ranked among the top 10 percent of public institutions for research expenditures — a tangible symbol of our breadth and depth as a university focused on discovery that changes lives and communities. And our patients know and appreciate the fact that UK HealthCare has been named the state’s top hospital for four straight years. Accolades and honors are great. But they are more important for what they represent: the idea that creating a community of belonging and commitment to excellence is how we honor our mission to be not simply the University of Kentucky, but the University for Kentucky.