Robert Bell originally from Winchester, Kentucky, a small town in central Kentucky. With a graduate class of less than 400 students, not many of us would continue our education and apply for college. I went on to play football for a year when I decided to transfer to Morehead State University where I would later graduate with a bachelor’s degree in Spanish. Since graduating, I have been a full-time employee with the migrant education program; a federal, title 1 program created to bridge the gap and support migratory students in their pathway to academic success. I began studying for my masters at UK with interest in learning different languages. I am bilingual; fluent in Spanish and English. My research interests include romance and creole languages. I am very interested in documenting creole languages and understanding how political power has an influence on these languages. Currently, I am working on my thesis which is aimed to document the loss of Limonese Creole used in Costa Rica due to negative ideologies of creole speakers, lack of education involving LC, historic racism, and other factors involving inequalities between mestizo and Afro-Costa Ricans. I am also interested in researching AAE and the influence of the use of AAE in school systems, variation of AAE depending on region, and the negative connotations/stigmas attached to language use by African Americans. 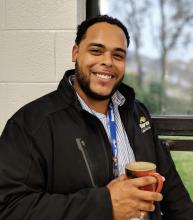 robert.bell@kctcs.edu
1622 Patterson
859-693-6187
LIMÓN PATWA: A PERCEPTUAL STUDY TO MEASURE LANGUAGE ATTITUDES TOWARD SPEAKERS OF PATWA IN COSTA RICA
Other Affiliations: