As part of a broader project examining language variation and change in post-Katrina Greater New Orleans, I report on preliminary results of linguistic analysis with a focus on the methodological conundrum of how to study ethnic identity in New Orleans. Ethnicity in New Orleans has always been fluid and complex, tracing back to colonial times when a tripartite social division of major ethnic groups existed – Free Europeans, Enslaved Africans, and Free People of Color (Campanella 2006). And indeed, New Orleans historically had a large population of Free People of Color compared to elsewhere in the American South. Over time, this population acquired intergenerational wealth and privilege that set them aside as an elite—and sometimes insular—ethno-cultural group which came to be known as Creoles (Brasseaux 2005). In current times, the term ‘Creole’ is contested. Some locals define Creoleness based on phenotypical features such as skin tone or hair texture, while others consider it a linguistic or cultural label, and still others refuse the legitimacy of this label entirely. Via quantitative and qualitative analysis, I shed light on a situation in which language change and social change appear to be progressing in tandem, posing questions about how to encode varied definitions – as well as varying individual stances towards those definitions – of ethnic identities in variationist research. In doing so, I build upon prior research on the linguistic expression of complex and multiracial identities (cf Holliday 2019; Bissell & Wolfram 2022) as well as work centered on methodological considerations in coding ethnicity (cf. Hall-Lew & Wong 2014; Nagy, Chociej, & Hoffman 2014).

Dr. Kelly Berkson will give our first colloquium talk of the semester regarding the Chin Languages Research project. Join us on Friday, September 16 from 1 to 2 PM in the Cornerstone Esports Theater. The talk will be broadcast live in the venue with the availability of realtime interaction among guests and the speaker.

This talk provides an overview of the Chin Languages Research Project, a collaboration between speech scientists and members of Indiana’s large Burmese refugee community. Indianapolis, just an hour north of the IU Bloomington campus, is home to a community of more than 20,000 Burmese refugees. Many are originally from Chin State in western Myanmar and speak under- and un-documented Tibeto-Burman languages from the Kuki-Chin branch. Our best estimate is that upwards of 30 Kuki Chin languages are being spoken in Indianapolis. For the most widely spoken of these—Hakha Lai, also called Laiholh or Hakha Chin—syntactic and morphological work exists, but phonetic and phonological work is minimal. Other languages, such as Zophei and Lutuv, are completely undocumented: their names have been mentioned by previous scholars, but no prior linguistic work exists. Yet Zophei, spoken by 20,000 people worldwide (Eberhard, Simons, & Fennig 2019), is spoken by 4,000 people in Indiana, including more than a dozen students on the IU campus. Lutuv, with 15,000 speakers worldwide (Eberhard, Simons, & Fennig 2019), is spoken by perhaps 1,000 people in Indiana and several students on the IU campus.

Against this backdrop, at least two observations can be made: (1) IU linguists have an invaluable opportunity to engage in intensive fieldwork with many speakers of under-resourced languages just an hour’s drive from campus; (2) Chin community members regularly face communication challenges in both urgent and daily settings which speech scientists are uniquely positioned to help address. I describe how our team of IU speech scientists, student members of the Indianapolis Chin community, and community partners from churches, social organizations, and local businesses is working to engage in scholarship and address practical needs in tandem. I discuss several ongoing initiatives, including translation of Covid-19 information, documentation of traditional knowledge through in-language ethnographic interviews, development of Lutuv literacy materials, and an NSF-funded collaboration that seeks to develop health-related materials for linguistically underserved communities. I also touch on several of the typologically rare phenomena exhibited by Chin languages, in order to highlight the sheer volume of linguistic research that can be done right here on the ground in Indiana. Throughout, I highlight ways in which our undergraduate Chin students are the MVPs on our team—they are incorporated into the research process from the ground up, serving as a bridge between the university and the community and helping to determine new research and service directions.

A lot of research has been devoted to understanding how speakers of multiple languages, multilinguals, use their knowledge of multiple languages to interpret language in context. But less is known about how speakers who know different varieties of a single language (‘dialects’) accomplish this. In this current project, the researchers investigate African American Language (AAL), a variety of English spoken primarily, but not exclusively, by African Americans. The current work plans to investigate how speakers of AAL understand sentences that use linguistic features that are present in AAL but not present in Mainstream American English (MAE), the ‘standard’ dialect spoken across the US. AAL and MAE overlap significantly, but there are specific grammatical constructions where the two diverge. This project investigates when and how AAL speakers use these variety-specific constructions in different contexts. Research into how AAL speakers use context to do this will shed light on how language processing proceeds in more naturalistic contexts, and will also shed light on the usage of a variety of English spoken by a significant portion of the US population.

This event has been deferred to a later date. More information to come.

Title: Language is social: why all phonetics is sociophonetics
Abstract:
The traditional view, among phoneticians and phonologists, is that speech and sign language reveal, at their core, a deeply abstract human ability to map arbitrary signs to signifiers independent of such influences as social knowledge or cultural norms. Under this view, phonetics is concerned primarily with what influence physiology and physics might exert on humans’ ability to perceive and produce speech sounds and hand gestures. Phonology, by contrast, is concerned with the organization —in the mind, in a language, in a syllable— of abstract representations of sounds and the constraints or rules that govern this organization. Language is, in this view, a property of the individual which can then be used to communicate with other individuals; each person a whole, ideal, speaker-hearer with a fully self-contained competence in their own language or languages.
In this talk I will present evidence, from my own research & that of others, that this abstract, individualist view of language is a big part of the reason that, famously, all grammars leak. I will consider the possibility that the smallest unit of “language” is more accurately understood to be at least two people and that social knowledge, including the anticipation of others’ knowledge, is a part of our core linguistic competence from the highest to the lowest levels of cognition. Rather than merely providing a “filter” on a more abstract linguistic competence, sociolinguistic knowledge is an essential part of what we know when we know a language. I will present evidence that a sociolinguistic revolution is well underway in phonetics and will close by arguing that the future of phonology, as a subdiscipline, is sociophonology.
Date:
Friday, September 30, 2022 - 01:00 pm - Friday, September 30, 2022 - 02:00 pm
Location:
William T Young Library, Alumni Gallery
Type of Event (for grouping events):
Linguistics Seminar Series 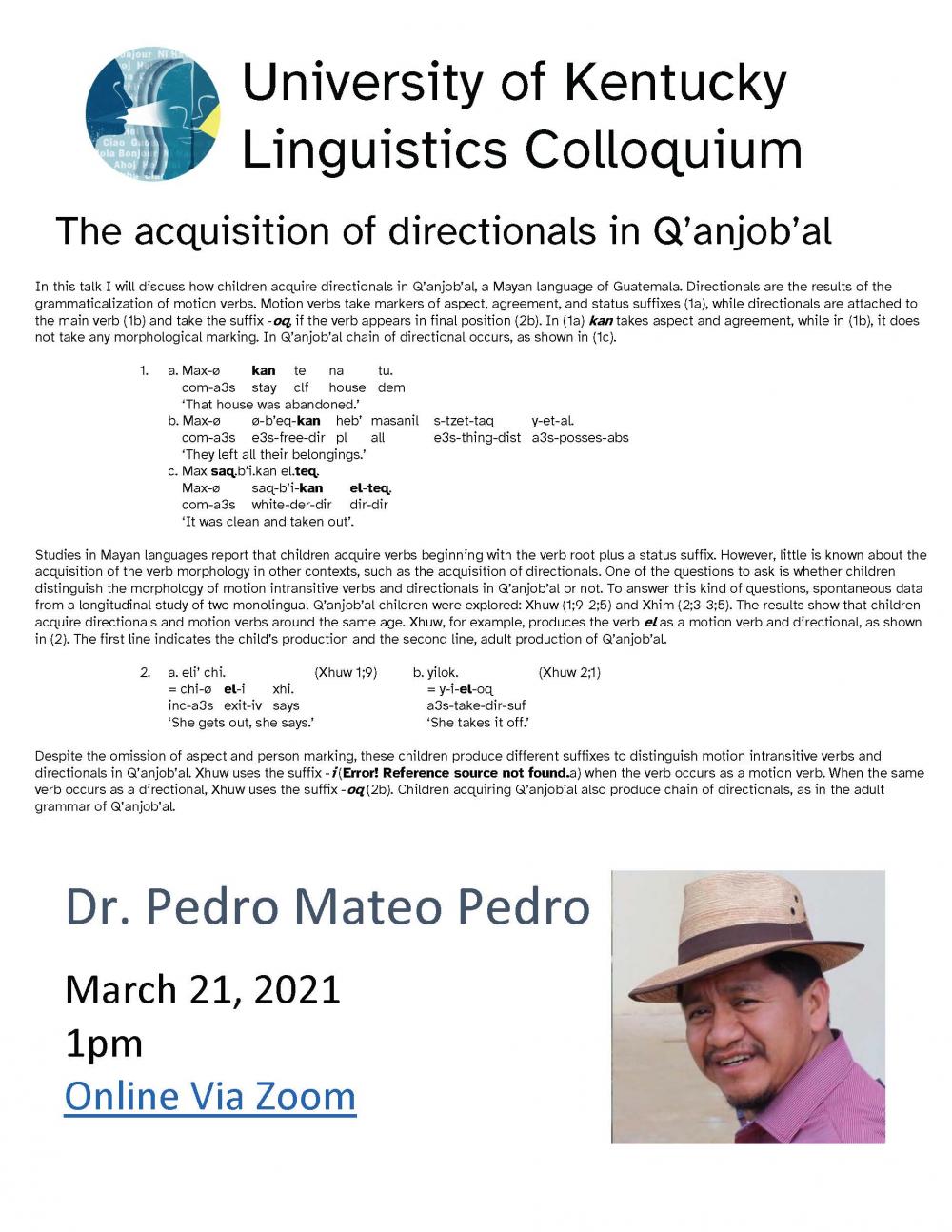 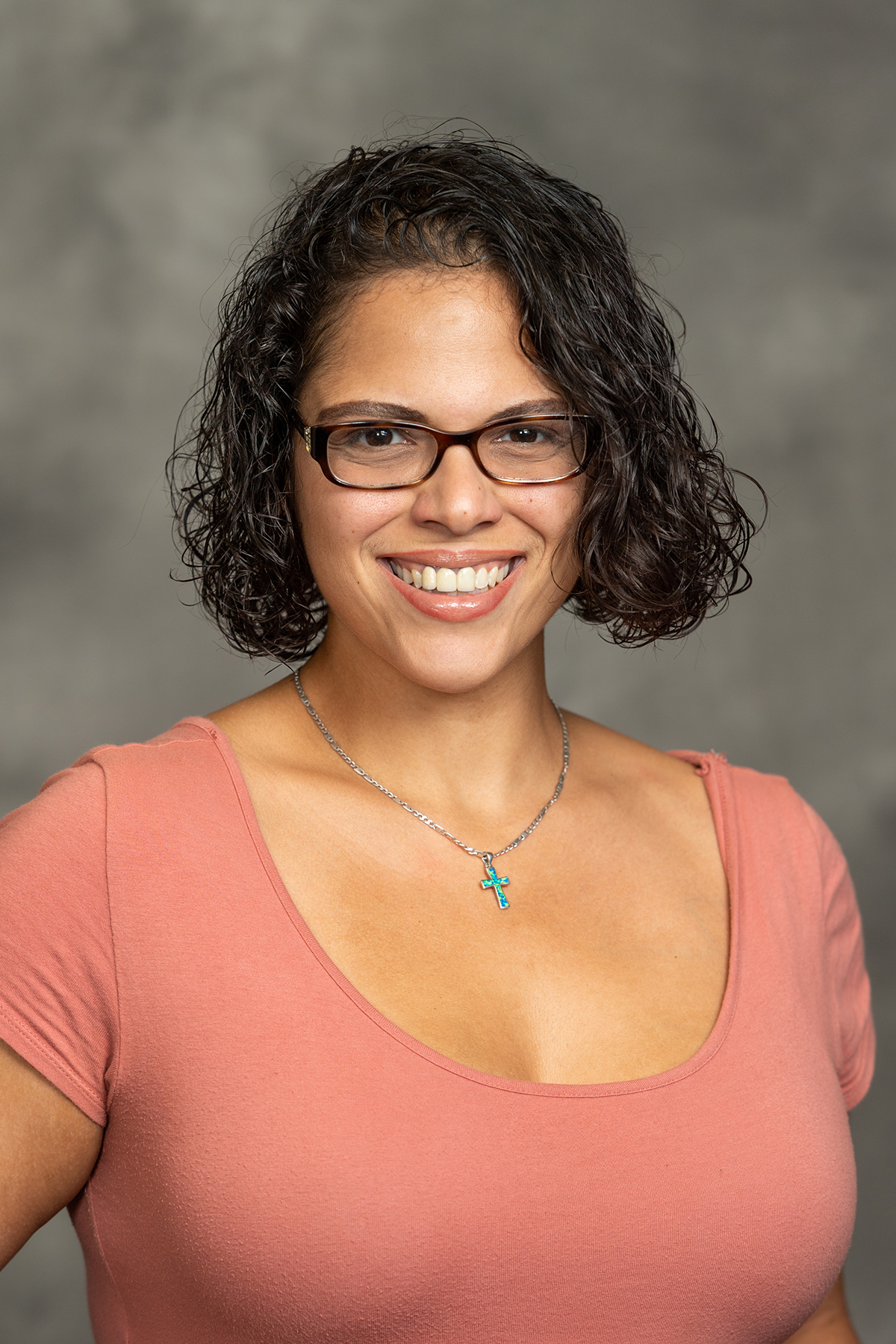 Kelly Elizabeth Wright (She/Her/Dr) is an experimental sociolinguist specializing in linguistic discrimination and its institutional outcomes. She identifies as a working class Black Biracial cis woman, an Afrolachian raised in Knoxville, Tennessee. Wright is a scholar-activist, working for linguistic justice outside the academy, and interdisciplinarity inside the academy. She has recently completed an interdisciplinary dissertation on perceptions of Black professionalism which introduces a new method of metalingusitic interviews to sociolinguistic fieldwork and investigates findings directly with sociophonetic experimentation. Her previous research features a machine learning study of lexical racialization in sports journalism and an audit study of linguistic profiling in the housing market. Wright is also an accomplished lexicographer and researcher of profanity.

Dr. Wright will reflect among her peers on key lessons learned during the University of Kentucky MA program in Linguistic Theory and Typology that shaped her research trajectory. Namely, she will highlight moments from Jennifer Cramer’s Research Methods, Kevin McGowan’s Sociophonetics, and Mark Lauersdorf’s Corpus Linguistics that not only shaped Wright into the researcher she is today, but also undergird the more inclusive and representative experimental best practices she advocates for across the discipline. Wright will lead the audience in consideration of what she has found to be the most challenging aspect of language science: the objectification of language data. This talk will end with an active, large group discussion on this central issue of linguistic inquiry and the ways in which we–as a community of experts–can balance approaching empirical validity on one end and radical acceptance on the other.

A recording of the lecture will be posted to this page after the event.

Dr. Erica Britt, Associate Professor of English at the University of Michigan-Flint, will give the annual UK Department of Linguistics Martin Luther King Day talk.

This talk provides a description of the Vehicle City Voices (VCV) project, an oral history and linguistic survey of Flint, Michigan, and illustrates the role of the oral history interview as a critical site for the production of the individual and collective identities of Flint residents. Through this presentation we will explore the discursive tools that oral-history interview participants use to construct and contest mass-mediated representations of their community. In particular, given a media landscape that frequently circulates chronotopic representations (Bakhtin 1981; Agha 2007) that position Flint as a certain kind of city (i.e "apocalyptic" and in decline) populated by a certain type of person (i.e. dangerous and impoverished) at a certain moment in time (i.e. in its current deindustrializing/post-industrial period), the residents in this study respond by using reported speech and reported thought to challenge and revise these representations while at the same time amplifying the voices of those who are actively working to construct images of a dynamic, living city that transcends its negative reputation.